Cities Worth Visiting in Turkey

The 16 million population living in a city that was founded even before some of the major countries on Earth, might be the hook that pulls you to Turkey. It is admittedly the most famous city in the country, and perhaps the world. The historical importance alone is enough to make it a worthy visit. Every inch of this magnificent city is worth seeing. You can take a ride on Metrobus, bus, sarı dolmuş, or any motor vehicle, and cross the continent in minutes! 3 different bridges across the Bosphorus strait connects Asia and Europe. While their architecture is somewhat different, don’t worry, still speak Turkish, and perhaps your local tongue.

For most historical trips, the European side is highly recommended for being the home of many old-world wonders. On the most Eastern Corners, the Byzantine Empire that was founded during the end times of the Roman Empire, found itself on another set of seven hills to remind the world that Rome was still alive in all corners of the world. The Byzantine Empire found itself on seven hills of Istanbul, where they honoured themselves as the new Rome. They built Churches on each of the hills to continue the tradition, and the land stayed unconquered for some time until the Ottoman Empire came along. In 1453, Constantinople was conquered, and generations of sultans from then on built Mosques on each of the Seven hills to send a message to the Western empires. While the Fatih district is home to amazing mosques, Hagia Sophia and the Sultan Ahmet Mosque sitting across from each other by Haliç is perhaps the most famous among them.

You can read more on Istanbul in our other articles that focus on individual attractions, such as the Fatih district, The Prince Islands, and breakfast destinations.

This Turkish province settled by the south of the Marmara and north of the Aegean regions, has played the biggest role that changed the world TWICE. Çanakkale was the original land that the city of Troy was founded on. You can still visit the same lands the Odysseus walked once, or Achilles and other Greek heroes invaded. The now-ruined city of Troy is magnificent and captivating for any traveller.

By the Eastern coasts of Çanakkale, the Gulf of Gallipoli lies. The gulf was the turning point of the Turkish Independence War against the ANZAC forces that served under the British Empire at the time of WWI. Now, the same lands that are a grave for both sides, is home to a Monument to remember those who have fallen for their people. Those who arrive Çanakkale by the sea will be greeted by the immortal words of Atatürk about the conflict itself.

The heart of Turkish summer tourism, Muğla has been an attraction since ancient times. Although it has a population of 938 thousand, the whole province receives more than double that number as tourists. It is home to popular beach towns like Bodrum, Fethiye and Marmaris with gorgeous seas. It also has its airport for easy travel. It is possible to find leftovers of ancient civilizations on every part of Muğla. In the coastal town of Datça, the Knidos ancient city’s own Naked Aphrodite statue is a must-see spot for the history geeks. 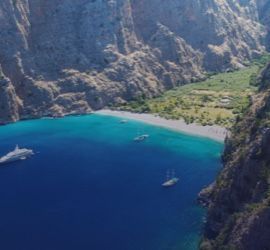 As the coastal city right by the junction of Aegean and Mediterranean Seas, Marmaris is a highly visited location for sailing fanatics who visit the coves in the region. Marmaris is home to plenty of luxury hotels that welcome millions of tourists every year. It is chosen for its warm weather all year round, especially during early summer. For those who enjoy the nightlife, the town is also known for its incredibly attractive bars.

One of the 13 districts of Muğla, Fethiye carries the weather of Izmir, with the coves of Bodrum. The district is famous for historical sites such as the Tomb of Amyntas, the Ancient City of Letoon, and a natural tower created in the sea called Af Kulesi where divers frequent for adventure. Fethiye’s main source of revenue is the beaches of Ölüdeniz. Winner of the “Most Beautiful Beach of the World” Title in 2006, Ölüdeniz is one of the calmest and clearest waters in the world.

Home to a castle that carries the district’s name, Bodrum is a developed town that benefits from the history and sea tourism, as well as the alive nightlife. The district is a frequent stop for sailing fans for its beautiful and modern ports. The ancient city of Halicarnassus was founded on the land of Bodrum. One of the World Wonders, the Mausoleum used to stand on the land. Bodrum nowadays is a great escape spot for those who wish to have their villas in a more secluded setting. Don't get us wrong when we call it a calm district. It is only quiet in the morning, because the night population is taking a good rest after a night out. When the sun sets, Bodrum becomes alive and loud. Due to the developed tourism, it has one of the best night clubs in the south of Turkey. Halikarnas is the most popular for its restaurants. However, the town is full of nightclubs. We are sure that you will find the perfect spot for your needs.

In summer, Bodrum gets full of local and foreign tourists. In the season, you can find many art events, theatres, concerts, dance shows, and so much more! The experience of any event in the ancient amphitheatre is something that you will never forget. You can feel the past lives of the town when you are experiencing modern time art events.

Surrounded by mountain ranges, Ankara is Turkey’s capital city. It has a rich history as people have been inhabiting the region since the Stone Age! The city is now considered as home to 5,5 million people in 2019.

During the early days of the country, Ankara was designated as a city for less than a million inhabitants, but in the 1950s as unemployment in rural areas forced people to move into the city, Ankara became massively overpopulated.

An ancient city founded by the Aegean Sea, it is full of rich history, and an up and coming infrastructure in Turkey. Izmir is a highly touristic location as well as a city full of villas for private space. You will experience a warm summer throughout the year, and the beaches most of the year. Now, Izmir has become one of the three biggest provinces of Turkey next to Istanbul and Ankara.

Nowadays, the beaches alone are enough to draw global attraction in the summer season. Urla is a rather quiet town compared to other parts of Izmir. The villas here are an excellent opportunity for those who like to have peaceful and quiet days. In Urla, you should visit the Ancient City of Klazomenai, and step on the same lands as people from 4000 BC.

Home to the temple of Apollo, the statue of Medusa, as well as the world-famous beach Altınkum, Didim is a district of Aydın. It is located south of İzmir and north of Muğla. Although it is a small district with 74 thousand people, Didim receives a high number of tourists in the summer because of the ancient importance it carries.

Perhaps the most famous summer tourism destination, Antalya is one of the most popular holiday provinces of Turkey. There are many resorts where you can relax, rest, and enjoy the sea and sun. With its developed touristic facilities, you can find exciting and also relaxing activities almost every day you spend in the Mediterranean. Visited by 32 percent of the 49 million foreign tourists in 2018, Antalya has over 500 4-star and 5-star hotels in its center and surrounding towns such as Kemer, Belek, and Kaş. Belek district by itself manages to attract 2 million foreign tourists through its beautiful beaches, ancient history, as well as adventure sports.

Konyaaltı is home to the biggest and the most famous public beach in Antalya. Its 7 km long sandy beach stretches in front of many hotels, shops, restaurants, beach clubs, and malls in the city. You will be amazed by the view of the snowy Taurus Mountains that you will see from Konyaalti Beach.

As the most western district of Antalya, Kaş is a highly touristic location for being surrounded by ancient civilizations such as Apollonia, and Kyaenai. Kaş receives a great deal of summer tourism. Still, it is not difficult to see non-locals every season, since Kaş is one of the rare locations in Turkey to never see below 0 Celsius weather all year round. Patara beach is a wonder to explore. You will get to experience a perfect sunset from the hills overlooking the Mediterranean sea. It is a matchless experience to smell fresh air produced by Pine trees, as you walk on the beach.

The calmer point of Antalya, Kemer was home to many ancient civilizations before and now protects their leftover cultural heritage. The Ancient City of Olympus, as well as the Chimera Stone, are located here. While the district shares the climate with the rest of the Mediterranean coasts, it is possible to see snow on the top of the Toros mountains surrounding the region.