Coastal Cities of The Aegean Turkey

Aegean region is one of the seven wonderous regions of Turkey. It covers most of the western coasts where the country neighbours Greece by the shared, same-named sea. The region also extends to the Middle Anatolia on the northeast through a few provinces and also shares the regional borders with Marmara on the north, and the Mediterranean on the East. Before the region was famous for its wine and olive yards, Aegean was the trade center of many ancient civilizations, including Ancient Greece, and home to many kings and philosophers such as Homer, and Plato at the times. Now, the coastal cities mesmerizes the visitors through its mixture of the neoliberal and modern architecture, with its still taken care of ruins and old buildings. Modern population has tried its best to secure the ancient history on the still untouched islands where you can visit on a boat. The set of islands and locations where the mythological stories such as the Odysseus, Medusa, and Herakles are all visitable from the coastal cities of Aegean. The surrounding climate of the region has helped in developing Aegean to be a land of wine, honey and appetizers.

An ancient city founded by the Aegean Sea, it is full of rich history, and an up and coming infrastructure in Turkey. It endured the conflicts of Turkey’s Independence War in 1922, as well as being founded by the Trojans of 3000 B.C. Izmir is a highly touristic location as well as a city full of villas for private space. You will experience a warm summer throughout the year, and the beaches most of the year.

Urla, As a coastal district of Izmir, it is another highly historical town. Nowadays, the beaches alone are enough to draw global attraction in the summer season. Urla is a rather quiet town compared to other parts of Izmir. The villas here are an excellent opportunity for those who like to have peaceful and quiet days.

What to see and do in Urla?

Visit the Ancient City of Klazomenai, and step on the same lands as people from 4000 BC.

Go for a swim faster than anywhere else in the province! The beach can be literally at your doorstep in Urla.

Visit the annual Art Street of Urla, set up by the independent hand craftsman shops.

Çeşme, Meaning “Fountain” in Persian, this district of the western coastal city is quiet in the morning, and alive at night. It receives the name from the various fountains found around the town left from the Ottoman era. With a population of 20 thousand, the town gets annual tourists just to see the famous Çeşme Castle. It is also possible to travel between Greek Island Chios.

Ancient City of Ephesus; Only 156 km away from the district, this ruin of the old world used to be the trading center of the region. It contains the region’s one of the largest theater, as well as the second-largest city-state. The travel time between Ephesus and Çeşme is one and a half hours, so be sure to plan your schedule accordingly.

Çeşme Castle; is a monument left from the Ottoman Empire’s Beyazid II. In the past, the castle used to protect the town from weather conditions, as well as the enemy ships. Nowadays, it operates as a museum showcasing archeological findings from the ancient civilizations around.

Due to its location, Aydın has always been one of the top spots for global tourism and farm exports. The region's warm climate all year round has helped the population of Aydın to contribute plenty of delicious food and appetizers to the Turkish cuisine. The history it has is one of the rarest as it was home to King Agamemnon.

Kuşadası, Now a district of Aydın province, Kuşadası was once the central trading zone for sailing merchants. It was the port that opened the Aegean Sea to the Mediterranean. Kuşadası was thought to be found in 11th century B.C. by Ions, and it was the home for many ancient civilizations afterward. The gulf of Kuşadası continues to be a highly touristic location.

Ancient History; It is believed that Ionians established the first society of the district by the name of Neopolis. You can still see their ruins by the tip of the half-island. The ancient Greek king Agamemnon has built his town there with the name of Pygale.

The Last Home of Mary; Through various rumors and legends, it is believed that the last home of the Virgin Mary is located near Kuşadası. Although it is a relatively new discovery, the remains of the house was visited by various Popes, as well as millions of people from different religions.

The Temple of Artemis; A remnant of the Ancient Greeks in Ephesus, it was the shrine to pray on the goddess Artemis. It was destroyed by both enemies and natural causes, arson, and rebuilt multiple times. You can still visit the remains of the temple in Ephesus.

Didim, Home to the temple of Apollo, the statue of Medusa, as well as the world-famous beach Altınkum, Didim is a district of Aydın. It is located south of İzmir and north of Muğla. Although it is a small district with 74 thousand people, Didim receives a high number of tourists in the summer. It shares the climate with other Aegean provinces and can have windy nights.

The Temple of Apollon; was the gathering location for those who wished to connect with the god of sun, music, arts, prophecy, and plague.

Altınkum Beach; Meaning “Golden Sand”, this blue flagged beach is one of the clearest to swim in all Turkey. Its quite shallow and long waters make a perfect spot for water sports, as well as the enjoyments for families.

Transportation; Didim is only 90 km away to the Bodrum Airport, while being only 150 km away to Izmir Adnan Menderes Airport. There are bus services to Didim from Izmir, as well as the two airports. It is possible to reach Izmir via train, and then take a bus or taxi to Didim.

Akbük Cove; As the deserted cove of the province, Akbük inhabits an emerald-colored rock formations under the sea. Its short distance to the district makes this cove a must-see location. 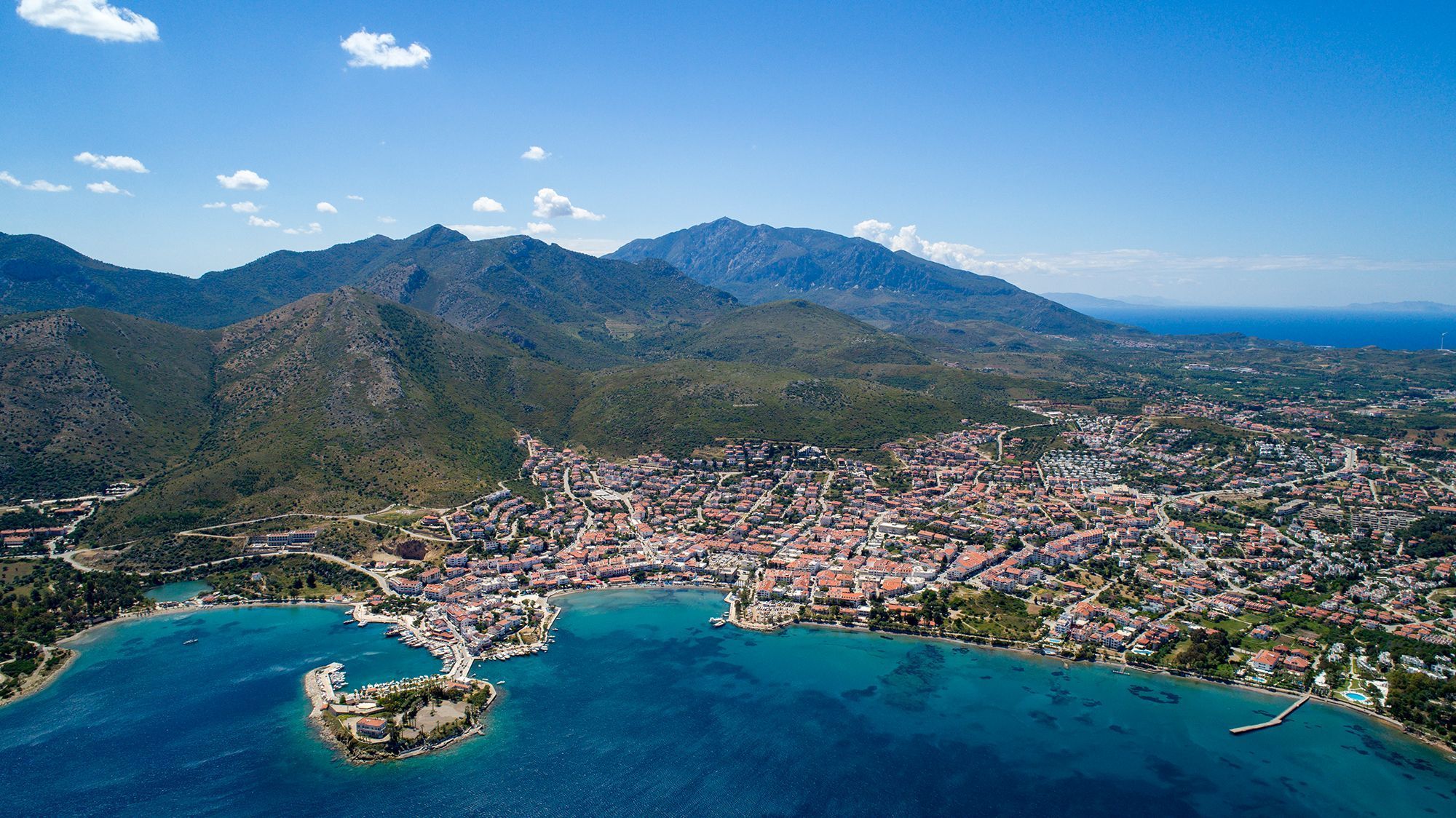 The heart of Turkish summer tourism, Muğla has been an attraction since ancient times. Although it has a population of 938 thousand, the whole province receives more than double that number as tourists. It is home to the popular beach towns like Bodrum, Fethiye and Marmaris with gorgeous seas. It also has its own airport for easy travel.

Marmaris, As the coastal city right by the junction of Aegean and Mediterranean Seas, Marmaris is a highly visited location for sailing fanatics who visit the coves in the region. Marmaris is home to plenty of luxury hotels that welcome millions of tourists every year. It is chosen for its warm weather all year round, especially during early summer. When you do visit it, be sure to take a yachting trip, either to visit the uncharted beaches or to experience the beauty of Marmaris’ Coves. For those who enjoy the nightlife, the town is also known for its incredibly attractive bars. There is a themed nightclub for everyone.

Datça, One of the furthest western districts of Muğla, as well as among the Aegean Districts, Datça is yet another highly historical location. It is possible to find ancient structures left from the Greek and Trojan era. The Knidos ancient city’s own Naked Aphrodite statue is a must-see spot for the history geeks.

Almond Blossom Festival; This is an annual festival taking place early February to celebrate the upcoming spring and summer seasons. Almond flowers begin to blossom around this date, and the locals believe in a strong connection between the way almonds blossom, and the way people love the land. It is a time to gather around with community and family, to play competitive games, sing, and farm.

Healing Lake of Ilica; Only 50 meters away from the sea, there is a lake believed to have healing powers.

Dalaman; is home to an international airport on its own. Although the European flights happen weekly, there are daily flights from all over Turkey, Istanbul, especially. Dalaman is the district that connects the rest of the world with Aegean and Mediterranean regions. There is also a major bus station and car rental services by the airport for all your travel needs.

Dalaman Airport; This international flight service is close to the major cities nearby. It offers frequent bus rides to the city centers to travelers.

Ancient Ruins; Meaning “Nice, Good” in a forgotten language, Euhippe ancient town is a legendary point near Dalaman, next to the Alaçatı village. Although it is missing on the map, the hiking trip does discover the area can be a fun activity.

Bodrum, Home to a castle that carries the district’s name, Bodrum is a developed town that benefits from the history and sea tourism, as well as the alive nightlife. The district is a frequent stop for sailing fans for its beautiful and modern ports. The ancient city of Halicarnassus was founded on the land of Bodrum. One of the World Wonders, the Mausoleum used to stand on the land. Bodrum nowadays is a great escape spot for those who wish to have their own villas in a more secluded setting.

Beaches; Swimming should be the number one priority for you once you are settled in your home or your hotel room. Millions of tourists choose Bodrum specifically for the opportunity to swim right in the middle of such a complex history.

St. Peter’s Castle; With an underwater archeology museum inside, this ancient castle was built by knights of several countries in 35 years by 1937. Inside the museum, you can see amphoras from the 4th Century B.C, as well as ships on display from similar eras.

The Theater; A monument from the 4th Century B.C. Greeks, the ancient theater is still used to this day during the summer for concerts and other activities. It can host 13.000 viewers thanks to the restorations it went through in the 1960s.

Fethiye, One of the 13 districts of Muğla, Fethiye carries the weather of Izmir, with the coves of Bodrum. The district is famous for historical sites such as the Tomb of Amyntas, Ancient City of Letoon, and a natural tower created in the sea called Af Kulesi, where divers frequent for adventure. Fethiye’s leading source of revenue is the beaches of Ölüdeniz. Winner of the “Most Beautiful Beach of the World” Title in 2006, Ölüdeniz is one of the calmest and clearest waters in the world.

Ancient Ruins; The ancient site of Likya, a city of the Lidia, is considered to be one the land that found the concept of money, and founders of the metallic coins, is found in Fethiye.

Tower of Af Monastery; As a highly historical spot for pre-Ottoman civilizations, this cliff by this monastery is now a popular diving spot for thrill-seekers.

Knight Island; This is the only the habited one on the region’s string of islands. The only town of the island receives sunlight the whole day because it is in the middle of the water, without any mountain around to cover it up.